Prepare for Leadership: Using the DISC Model and Developing Your Values

When preparing for leadership, it is important to consider and distinguish the components of your unique personality. In Drea Zigarmi’s Achieve Leadership Genius, these elements include your subconscious self, disposition, values and persona.

Each of these factors has a considerable impact on your personality, but it is important to dissect each to discover a holistic view of who you are as a person. While each of these differs, the fundamental concepts of an individual’s personality can be described using the DISC model.

The DISC model centers on four different personality traits: Dominance, Influence, Steadiness and Conscientiousness. The foundation for the DISC model comes from a theory that people tend to develop a self-concept based on one of these four factors. In essence, the idea is that you are prone to exhibit certain behaviors and disposed to not use others. For example, you instinctively present yourself to others using behaviors that you’ve learned over time and frequently display.

The DISC Leadership Model will take your organization’s #LeadershipDevelopment to the next level. @InspireSoftware explains how it works in their latest blog post.Tweet This!


A deeper understanding of your DISC traits can be discovered through self-observation and personal reflection. Taking the time to understand where you stand in the DISC model will enhance the development of your leadership skills. Cultivating an understanding of how you naturally respond to situations and the ways in which you do not naturally respond allows you to choose your response more consciously. This self-understanding ensures you avoid regrettable reactions and allows you to add a layer of versatility to your conscious behavior. 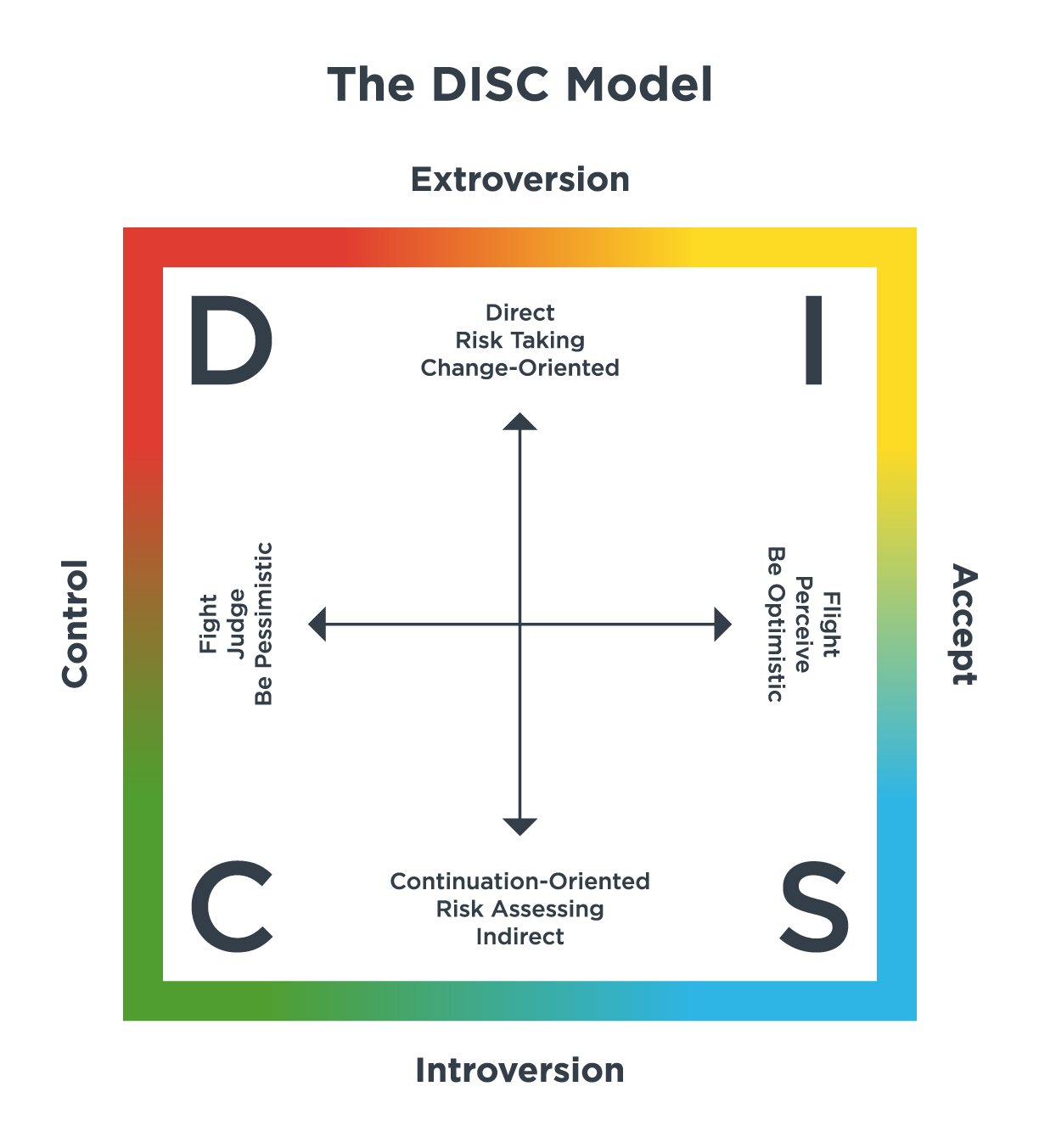 Another distinction to make is the difference between disposition-driven and values-motivated behavior. Your disposition-driven behavior is the instinctive, subconscious behavior that could not be considered premeditated. This can best be demonstrated in the way you go about buying a car. Do you thoroughly research data about the car before buying it? Do you rely on the opinions and endorsements of friends or famous individuals to guide your decision?

Either way, the actions taken up to the point of purchase are based on where you stand in the DISC model. However, your reasoning behind the car you buy is based on your values. An example of this might be, did you buy your car for economic reasons, such as price or gas mileage, or was your purchase a luxury vehicle because you value status? Either way, the car you choose to purchase is influenced more heavily by either your disposition or values.

The Role of Values

Unsurprisingly, values have a fundamental role in your leadership approach. Values can be defined as an enduring belief that a particular end or mean is more socially or individually preferable than a different end or mean. Essentially, your values are what you cognitively consider to be good or bad. Equally important, however, is your followers’ perception of your values. The perception of what you value by those you lead will heavily influence their morale and motivation to follow you. To be an effective leader, it is important to clearly define the values you hold and establish a baseline for how your values should be perceived by others.

Values are built on a foundation of beliefs, so your understanding and exploration of values must be rooted in the beliefs you hold. For clarification, a belief is the mental acceptance, and more so the conviction, that an idea or perception you have about something is true in reality. Developed values differ in that they are formed through direct experience with the object of the belief, examination of the alternatives and the anticipation of potential consequences. Values must meet the following 5 criteria to be considered a developed value:

Being prepared for leadership also includes understanding the Five Contexts of Leadership. Need to brush up on these contexts? Enroll in our eCourse to reach your full potential as a leader!

Avoiding the Great Resignation and Regret
How I believe we’ve avoided the ‘Great Resignation’ and are preventing the ‘Great Regret’ through Optimal Motivation.
Keep Reading
Back to School Time, All the Time! How Great Companies Are Creating Cultures of Applied Learning
As the sun sets on another summer season, we shift our attention to the next season in life. For many of us, it’s time to move on from the joys and pleasures we ...
Keep Reading
How to Maintain Healthy Work Engagement During the Dog Days of Summer
The dog days of summer are upon us. For many employees, family commitments, vacations, and home improvement projects beckon our attention to things beyond our work ...
Keep Reading